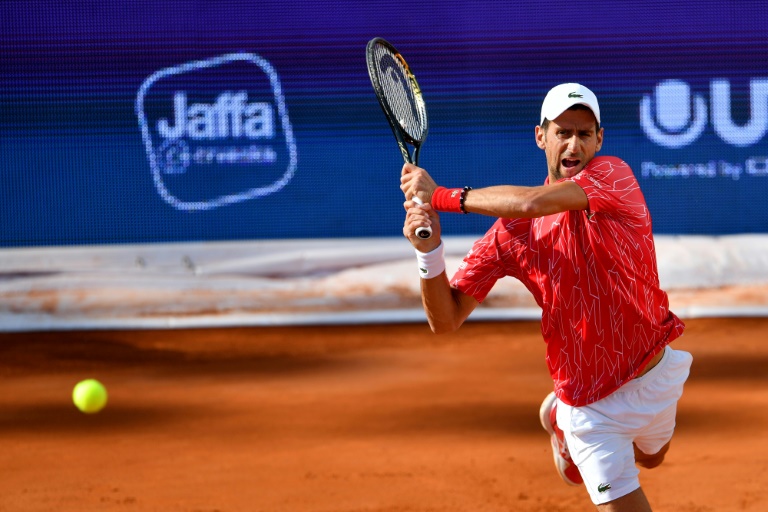 Djokovic eager to put US Open behind him in Rome

Novak Djokovic said Monday he wants to turn the page on his US Open disqualification when he competes in the Italian Open in Rome this week.

"It's great that I have a tournament right after that happened, because I feel like the earlier I get back in a competition mode, the faster I'll overcome that memory and kind of reprogramme it," the world number one told reporters in the Italian capital.

Four-time winner Djokovic, who has a first round bye in Rome and opens his campaign midweek, said he had been shocked over his last 16 exit in New York after he accidently struck line judge Laura Clark with a ball hit in frustration.

"Of course it was very hard for me to accept right after it happened," said the 33-year-old.

"For a couple of days I was in shock, and I was shaken by the whole default thing.

"I checked with Laura after the match. She said that she was fine. No big injuries.

"But, yeah, I mean, it was totally unexpected and very unintended, as well, of course to hit her.

"But as I said, when you hit the ball like that, as I hit it, you know, you have a chance to hit somebody that is on the court.

"The rules are clear, so I accepted it, and I had to move on. I have my first chance here in Rome."

Djokovic's New York default was his first defeat in 2020.

"I don't think I will have any major issues coming back to the tour and being able to perform well and hit the tennis ball, of course during the point," he said.

The 17-time Grand Slam winner however could not rule out it would not happen again.

"I have outbursts, and this is kind of the personality and the player that I have always been, you know," he said.

"Obviously went through ups and downs in my career, managing to control my emotions more or less.

"But you're alone out there. It's a lot of intensity and a lot of pressure.

"I cannot promise or I cannot guarantee that I will never ever do anything similar to that in my life. I don't know.

"I mean, I definitely am going to try my best that something like that never happens again, obviously."

Djokovic is the top seed ahead of world number two Rafael Nadal in the tuneup for the final Grand Slam of the season, the French Open which begins on September 27.

Nadal, who is bidding for a 10th Italian Open title, is returning after more than six months having skipped the US Open over coronavirus fears.

"For the guys who are playing US Open, it's very close, very tight after an exhausting month of tennis in the States on different surfaces," said Djokovic.

"Rafa obviously decided to stay on clay and practice.

"I mean, surely that gives him more advantage, but even if he didn't practice for that long on clay, he would still be the number one favourite in Roland Garros or any other clay tournament because he's Rafa, you know.

"And playing on clay, you know, he's the ultimate challenge."
Source: AFP