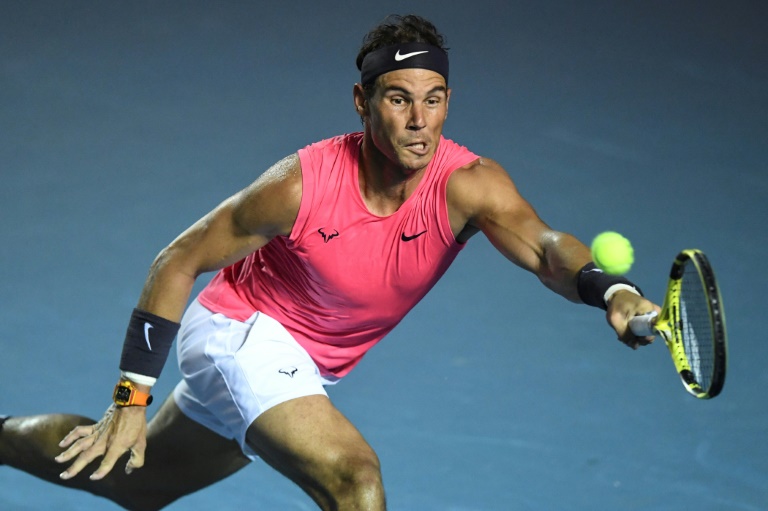 World number two Rafael Nadal stepped up his bid for a third ATP Mexico Open title with an impressive display of serving and shotmaking to beat Serbian youngster Miomir Kecmanovic on Wednesday.

The Spaniard hit 20 winners as he kept his hopes alive of regaining the top ranking with a 6-2, 7-5 victory over the 20-year-old Kecmanovic to reach the quarter-finals at the Acapulco hardcourt tournament.

"He's a very dangerous player. Young, with a lot of power. I'm very pleased with the victory," Nadal said.

"I played a very good first set and that's important for me. That gives me confidence."

Next up for Nadal is Kwon Soon-woo, who reached his fourth quarter-final of the month with a 7-6 (7/2), 6-0 upset against eighth-seeded Dusan Lajovic.

Nadal improved to 17-2 overall at this event. He needs to take the Acapulco title and have Novak Djokovic lose his semi-final match at this week's Dubai Tennis Championships to regain top spot.

Nadal roared to a 5-0 lead in the first set thanks to some superb serving and clutch winners.

In the second set, Nadal broke the Serb for a 5-3 lead but Kecmanovic broke back in the next game and held serve to level the set at 5-5.

Nadal, who made 17 unforced errors, clinched the match on the first match point when Kecmanovic blasted a forehand return well wide.

Elsewhere in the last 16, world number seven Alexander Zverev was knocked out by 22-year-old US qualifier Tommy Paul 6-3, 6-4.

The second seed German failed to convert four break points and made 10 double-faults as Paul claimed the first top 10 victory of his career.