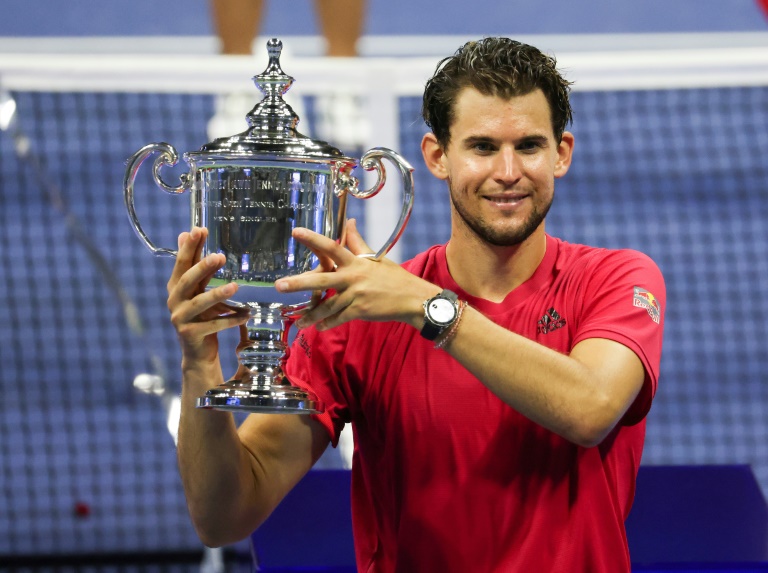 US Open champion Dominic Thiem said Sunday that chasing future Slams will be easier now that he has that elusive first tennis major under his belt following three near misses.

The second seeded Austrian thought he was heading for a fourth defeat in Grand Slam finals after going two sets down to fifth seeded German Alexander Zverev at Flushing Meadows.

With that monkey off his back, Thiem says he expects to be able to play more freely at Slams as he bids to snatch titles away from the "Big Three" of Roger Federer, Rafael Nadal and Novak Djokovic.

"Because, of course, I had it in the back of my head that I had a great career so far, way better career than I could ever dreamt of, but until today there was still a big part, a big goal missing.

Thiem came into the US Open final having lost in five sets to Djokovic in the final of the Australian Open earlier this year.

Thiem said the near misses were a chain around his neck during Sunday's last-two showdown on Arthur Ashe as he was overcome with nerves in the first two sets.

"Honestly, I think it didn't help me at all because I was so tight in the beginning," he explained.

"I mean, I wanted this title so much, and of course there was also in my head that if I lose this one, it's 0-4.

"It's always in your head. Is this chance ever coming back again? All these thoughts, which are not great to play your best tennis, to play free," he added.

Thiem said lifting the US Open was a dream come true.

"I achieved a life goal, a dream of myself, which I had for many, many years. Of course, as a kid, as well, when I started to play tennis. But back then it's so far away," he told reporters.

"Then I got closer and closer to the top. At one point I realized that, 'Wow, maybe one day I can really win one of the four biggest titles in tennis.'

"I put a lot of work in. I dedicated basically my whole life until this point to win one of the four majors. Now I did it. That's also for myself a great accomplishment."

Thiem starts his bid for second Slam in just over a week at the French Open where he will seek revenge for those two defeats to Nadal.

The Austrian limped through Sunday's tie-break but said he would be fit for Roland Garros after the realization he is a Grand Slam champion sinks in.

"I think physically I'm going to be fine, 100 percent. I'm going to have enough time to recover from all the troubles I had," he said.

"But the question is how I'm going to do it with the emotions mentally. Obviously, I've never been in this situation. I achieved a big, big goal. I don't know how I'm going to feel the next days."
Source: AFP